A Good Photograph is One That Sparks a Question.

A good photograph is one that sparks a question.

In looking at the pictures taken from the International Space Station of the earth at night, I find my attention drawn to that thin line separating earth from space: Our atmosphere. 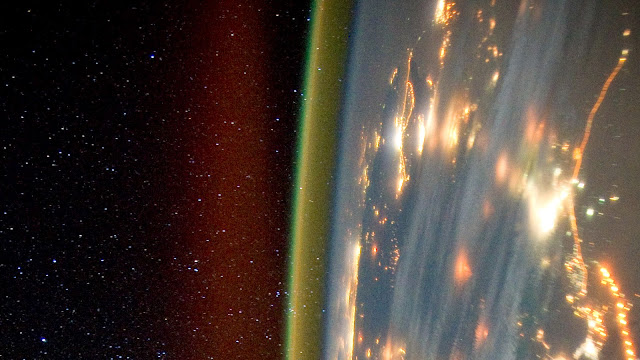 The First Question that comes to mind is: How thick is this protective layer?

The answer is that this layer you can see in the photograph above represent a line that extends ~100km above the surface of the earth.  60 miles.  The distance you could drive in less than one hour on most freeways.  The distance from Boston to Cape Cod.  This thin protective layer allows the earth's average mean temperature to be 57 °F (14.4°C) (reference link) and not to be subjected to the -250 to +250 °F (-157 to 121°C) (reference link) that the International Space Station experiences between the side away from the sun and the side towards the sun. 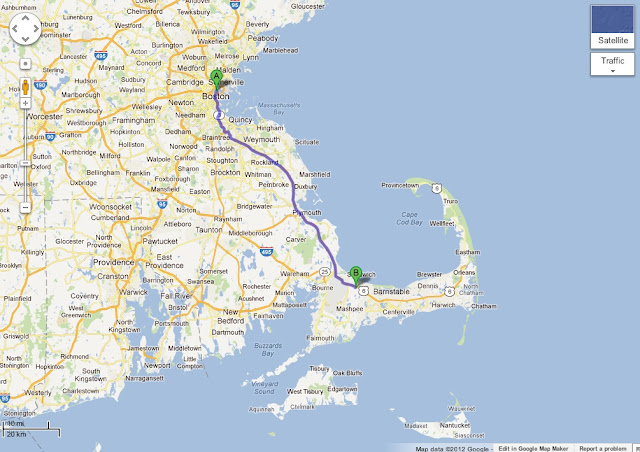 The Second Question is: What are the colors you can see in the atmosphere?  What causes this?  There seem to be yellows, greens, reds..... 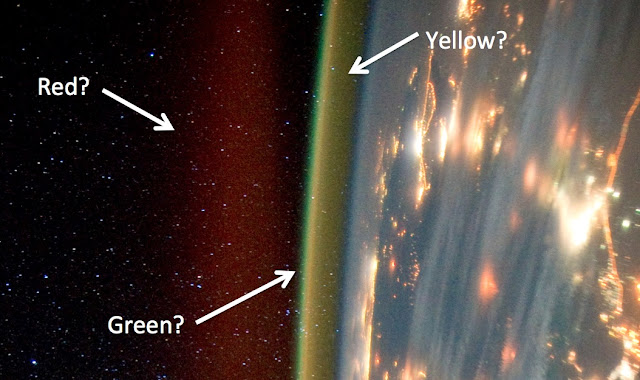 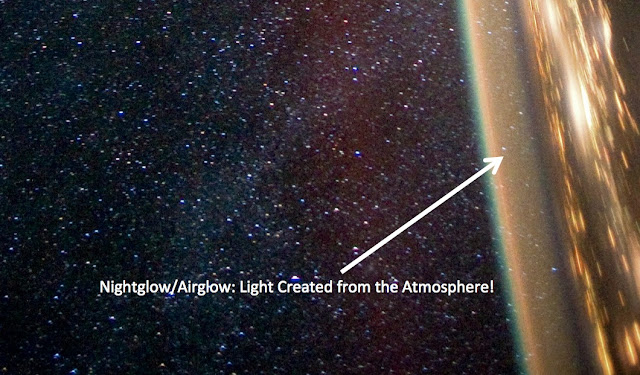 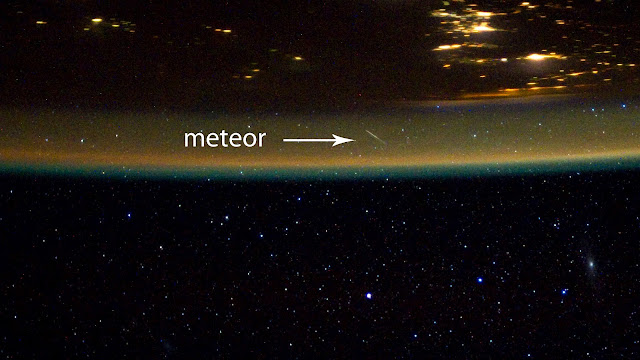 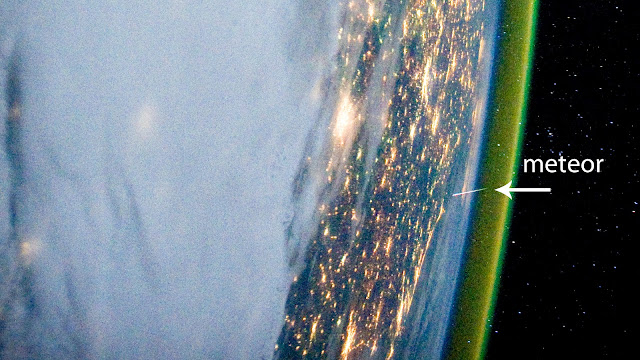 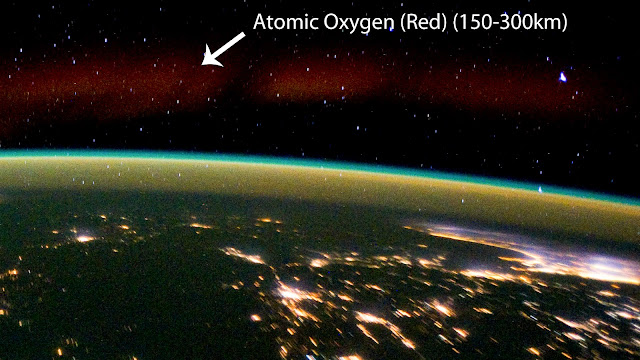 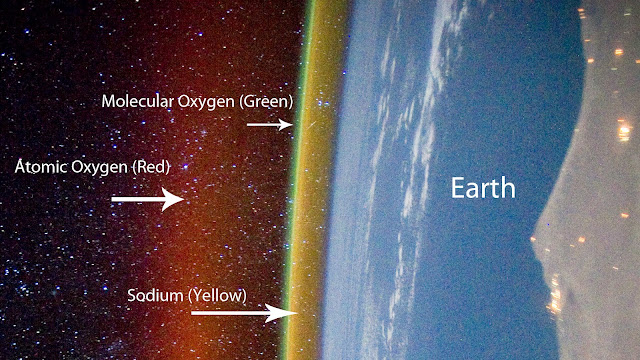 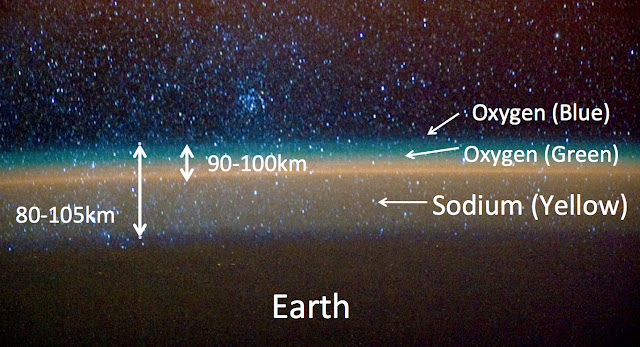 What is the Aurora?


What causes the Aurora?  Why does it look like it does? 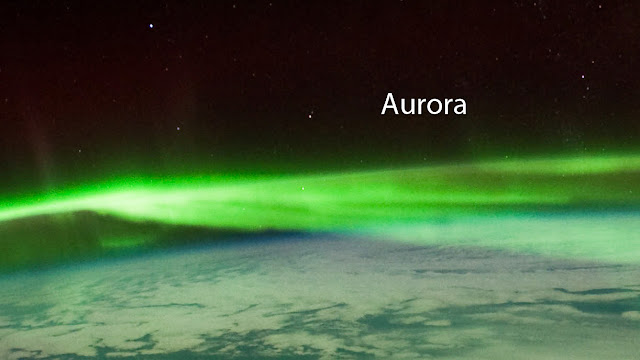 During a solar storm, or from a solar flare, ionized protons and electrons are emitted as from the sun as plasma (containing magnetic fields from the sun) and fly out into the solar system.  Sometimes these the plasma is directed towards earth and arrive at our magnetic fields at supersonic speeds.

The interaction of the plasma and the earth’s magnetic field causes the aurora.

The best description of this process is here: Department of Physics, University of Oslo


Oxygen when returning to its ground state gives off a green photon in 3/4ths of  a second, while the red photon takes much longer (~2 minutes).  If the oxygen atom collides with another atom during that 2 mintues, the red photon is not emitted.  So, at higher altitudes, where the atmosphere is less dense, and the oxygen atom has less chance of colliding with other atoms, the red auroras are seen. 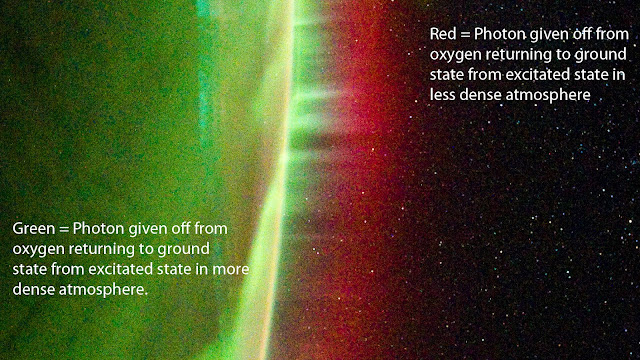 A great FAQ page about Auroras.
Posted by Alex Rivest at 11:57 PM 1 comment:

How This Movie Was Made! 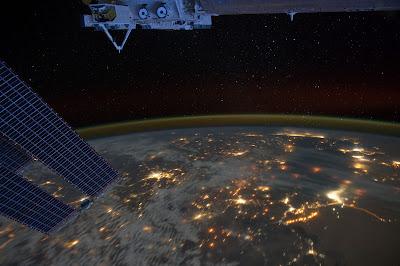 2) Imported each folder into Adobe Lightroom.

For example from the Image Set from: "Down the Persian Gulf at Night"
Imported images were tweaked a bit to enhance images, colors: 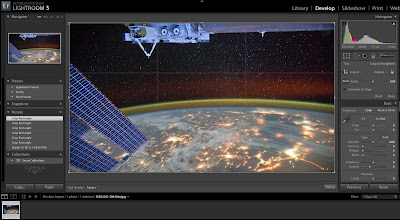 These images were then cropped to make the atmosphere line a prominent part of the image. 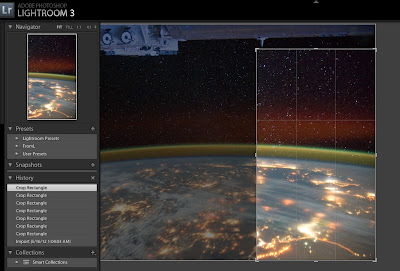 Image was then rotated to adjust the orientation of the earth. 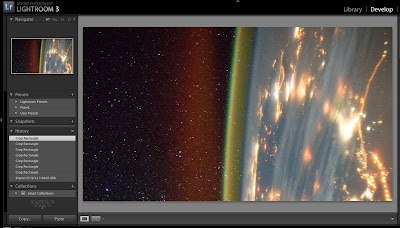 This crop/orientation was then "Synced" with the rest of the images from that series and exported.

These images were then imported to iMovie and edited for speed, length etc before adding titles and music.
Posted by Alex Rivest at 10:20 PM 2 comments:

Images:
Again, these images are all courtesy of NASA and The Gateway to Astronaut Photography of Earth. The Image Science & Analysis Laboratory, NASA Johnson Space Center.  This is by far one of the coolest places to see incredible images from the ISS and, as an artist, to have access to this amazing material.

http://eol.jsc.nasa.gov/Videos/CrewEarthObservationsVideos/
In particular, NASA astronaut Don Pettit has filmed and provided the majority of the available time-lapses.  He is one of the explorers that truly understands how important it is for explorers to share the wonder of their experiences through both art and science.  May all future explorers follow his lead.

To better understand and explain "Airglow," I must thank MIT assistant professor Dr. Kerri Cahoy for leading me in the right direction and to MIT PhD student Dan Chavas for helping me with the diagrams and for double checking some of the facts.  Thank you!